Southeast Asia is one of the major biomass-burning (BB) source regions in the world, and the BB-derived emissions are the main air pollution issue in Southeast Asia. Our research results indicate that effective management strategies are needed to reduce Equivalent BC (EBC) emissions in Chiang Mai, and it is necessary for public health authorities to give proper health advice during haze events to safeguard the vulnerable groups within the population. The reduction of open vegetation burning activities in northern peninsular Southeast Asia (PSEA) will bring considerable climate and health co-benefits to Southeast Asia and downwind regions (such as Taiwan).

Factors like topography, fuel type (i.e., nature, combustion phase, and environmental condition), and meteorology govern the BB fire persistence and spread. Substantial BB occurs in northern PSEA in the form of forest fire and agricultural burning almost every year and significantly influences the atmospheric composition and regional climate. For decades, PSEA has been a source of pollution affecting countries within the region and also outside of it, in East Asia, as the aerosol plume is transported eastward by the prevailing westerly winds. Regional transport of PSEA BB-derived aerosols has been investigated over locations in East Asia including southeastern China, the South China Sea, and central/southern Taiwan, most commonly in the dry spring season.

Chiang Mai, Thailand is located in the northern PSEA. Almost every year during the dry season (February to April), it is exposed to a significant level of air pollution owing to regional BB combustions. These BB emissions contain a large amount of trace gases and fine particulate matter (PM2.5) including black carbon (BC). BC is an absorbing type of aerosol, which has a significant impact on the earth's atmospheric radiation balance and climate. Facts have proved that BC has also a serious detrimental impact on human health.

Equivalent BC (EBC) measurements, from March to May 2016, were conducted using a 7-wavelength aethalometer in Chiang Mai, Thailand. Daily variations in aerosol light absorption were mainly governed by open fire activities in the region. The mean mass-specific absorption cross-section (MAC) value of EBC at 880 nm was estimated to be 9.3 m2 g-1. The median EBC mass concentration was the highest in March (3.3 μg m-3) due to regional BB (comprised of forest fire and agricultural burning) emissions accompanied by urban air pollution within the planetary boundary layer under favorable meteorological conditions. The contribution of fossil fuel (EBCFF) and wood-burning (EBCBB) emissions to the total EBC level was quantified. EBC source apportionment results revealed that BB contributed significantly more to total EBC concentrations (34–92%) as compared to fossil fuel (traffic emissions).

Health risk estimates of EBC in relation to different health outcomes were assessed in terms of passive cigarette equivalence, highlighting the considerable health effects associated with exposure to EBC levels. 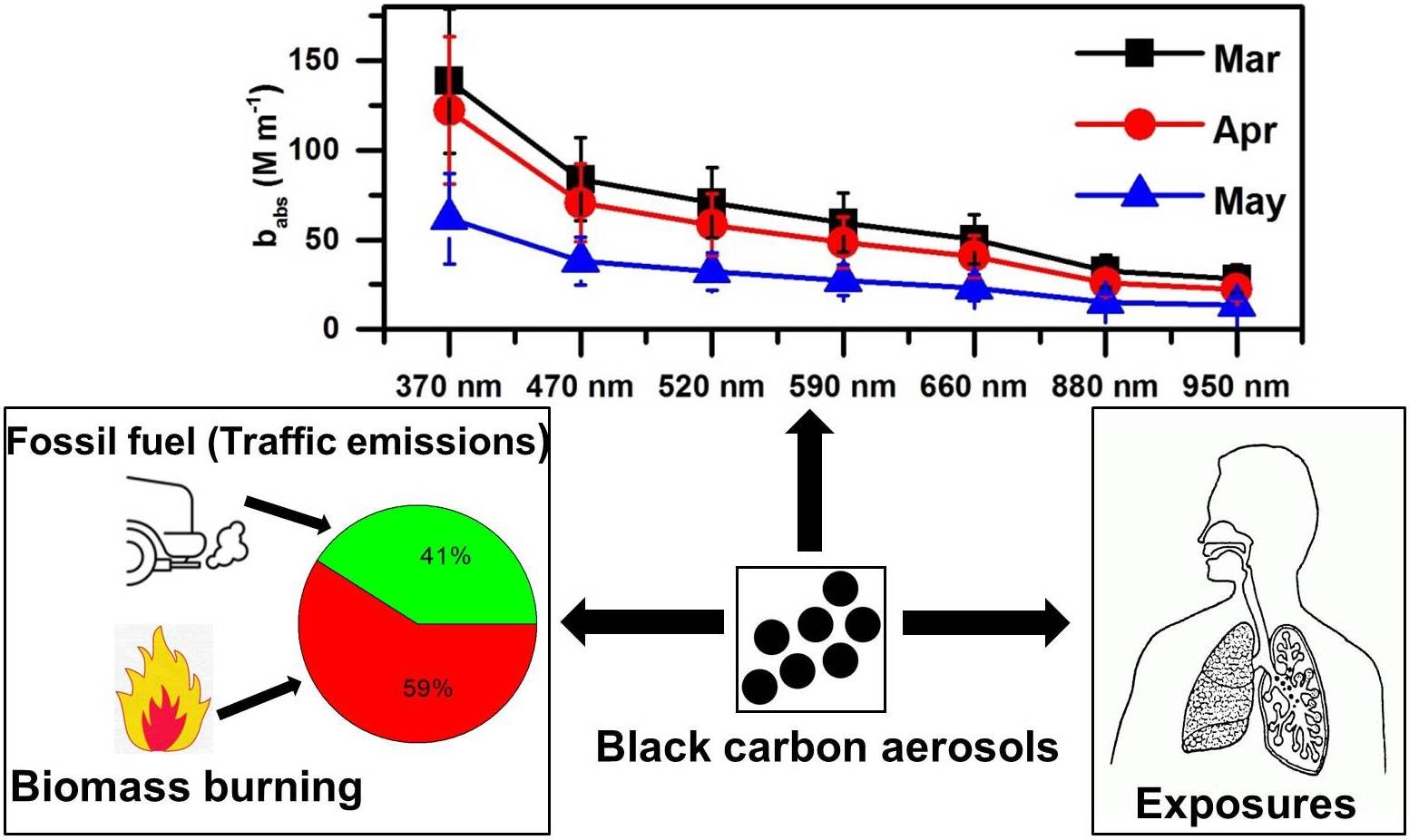