Ripples in the Pond of Magnetic Field Reconnection 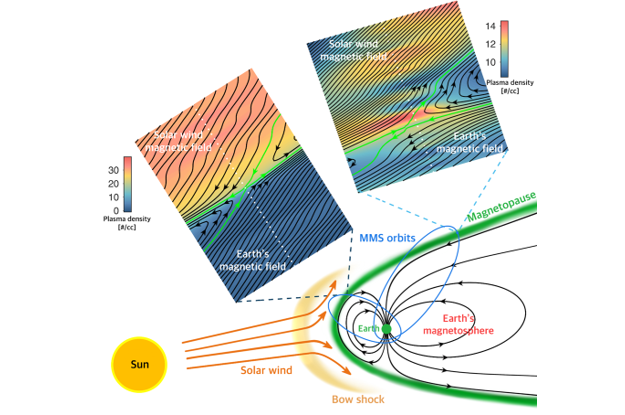 Figure. New magnetic reconnection phenomena occurring at the interface between the solar wind and Earth’s magnetosphere which are 70000 km and 150000 km away from the Earth, respectively. The magnetic field reconnection spans the spatial domain of 2000 km x 2000 km which are reconstructed from the NASA-MMS data measured at the spacecraft paths (white dotted points) along with the plasma physics model. The green lines mark the X lines which are less than 30 km from the spacecraft paths. Both the solar wind and the magnetosphere consist of electrons, ions (mostly protons), electric and magnetic fields. The background colors in the maps denote the plasma number density.
Background
The majority of the visible matter in the Universe consist of charged particles or plasmas which may develop the magnetic field reconnection (MR) at the places where the magnetic field direction exhibits abrupt change. Through the MR the magnetic field energy may effectively be transferred into the kinetic and thermal energies of plasmas, resulting in many explosive plasma phenomena occurring on the Sun, planetary and pulsar magnetospheres, even the blackhole, etc. The interface or magnetopause between the solar wind and Earth’s magnetosphere (at about 70000 km from the Earth) is one of the most likely sites in our solar system for the occurrence of MR between the interplanetary and Earth’s magnetic fields. The Earth’s magnetopause is also readily accessible for the in-situ observations by the spacecraft which cannot be carried out on the Sun and in other astronomical environments.
Magnetic reconnection may create cracks at the magnetopause boundary to prevent the conducting magnetosphere from perfectly shielding the Earth’s space environments from the solar wind. In the core regions of MR the magnetic field with different directions intersect forming an X line. The identification of MR signatures in space environments has long been the observational and theoretical challenges due to the fact that the locations of X lines cannot be predetermined and the spacecraft can only view limited portions of the structures. The NASA Magnetospheric Multiscale (MMS) spacecraft consisting of four satellites with 15 km apart and launched in 2015 is the state of the art mission aimed at studying the multiscale physics of MR.
The mirror waves with ripple like plasma and magnetic field have been widely observed in the solar system which are the product of mirror instability occurring in the circumstances of large temperature anisotropy. Specifically, when the temperature perpendicular to the magnetic field far exceeds the parallel temperature, the plasma may easily develop the mirror instability. Such anisotropic temperature characteristics are clearly evidenced by the MMS observations which have contributed to the findings of small scale mirror waves in the solar wind not seen in prior spacecraft missions.
New Discovery
Recently a research team led by Professor Lin-Ni Hau of National Central University (Taiwan) have utilized the NASA MMS spacecraft data along with the theoretical models to reveal for the first time the overall geometry of magnetic reconnection (MR) with the presence of an X line within the spatial domain of 2000 km x 2000 km. Within 15~30 seconds of traversing across the Earth’s magnetopause all four MMS spacecraft with exceptionally high temporal resolution of 0.15 seconds have caught for the first time the signatures of mirror waves surrounding the X line. The two MR events are located at 70000 km and 150000 km from the Earth respectively and exhibit common features of plasma and magnetic field ripples in the pond of MR with the spacecraft paths less than 30 km from the X lines. The coexistence of MR and mirror waves are in support of the earlier theoretical prediction of mixed MR and mirror instability which may yield more drastic processes of energy conversion and plasma acceleration. The new discovery published in the October issue of The Astrophysical Journal Letters (ApJL) by Hau et al. may have shed light on the possible mechanism for the explosive magnetic reconnection phenomena occurring in space, solar and astronomical plasma environments.