NCU International Studies: Changes in Rainfall Characteristics over Taoyuan Because of Anthopogenic Aerosols 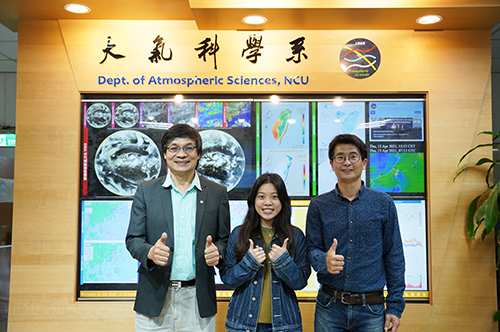 Recently Taiwan has been facing severe water shortages; many cities and counties are on the edge of running out of water. Research teams of the Department of Atmospheric Sciences of National Central University (NCU) and the State University of New York at Albany (SUNY Albany) in the United States analyzed the satellite data from the National Aeronautics and Space Administration (NASA) and a 13-year record of continuous surface observation to examine the influence of aerosols on warm clouds and precipitation of northern Taiwan in autumns. The research found that air pollution during autumn will result in changes in precipitation characteristics. The research outcome was published in Atmospheric Chemistry and Physics, a top-ranked journal in Atmospheric Science.

“Taiwan receives most rainfall from May to September; this period is the plum rain and typhoon seasons. Even though the rainfall in autumn and winter in Taiwan is comparatively less, it plays a crucial role in maintaining reservoir levels. The air quality (PM2.5 level) during autumn and winter is relatively poorer. Air pollution can not only cause harm to human health but also may affect the characteristics of precipitation,” explained Dr. Sheng-Hsiang Wang, Associate Professor of the Department of Atmospheric Sciences at NCU.

The NCU research team proposed the observational evidence for the aerosol indirect effect on the basis of the integration of particulate matter 2.5 (PM2.5) mass concentration, meteorological parameters (including temperature, humidity, wind direction, wind speed, and rainfall) from surface observations, and aerosol, cloud parameters from satellite observations. Taoyuan is a densely populated and highly industrialized area. During autumn, a season with more pollutants in the air, the characteristics of warm clouds, which internal temperature of at least 0°C, are thin and broken. Higher aerosol concentration redistributed cloud water to more numerous and smaller droplets under a constant liquid water content, reducing collision–coalescence rates, which further suppressed the precipitation and changed cloud lifetime. In other words, the formation of rain droplets becomes difficult and thus rainfall is less frequent.

The research team further analyzed the observation data of raindrop size distribution, which was consistent with the findings on the aerosol indirect effect: the daily average rainfall on polluted days decreased by 6.8 mm compared with clean days. The difference lies in the decrease in the numbers of drizzle drops and medium raindrops as well as in the increase in the number of larger drops. However, the percentage of the larger drops is comparatively low, and so is the precipitation efficiency of them. The increase in larger drops has no benefits to the total rain increment. To summarize, air pollution has changed the characteristics of cloud and precipitation in the Taoyuan area, may cause a knock-on effect on the water storage in Shihmen Reservoir. 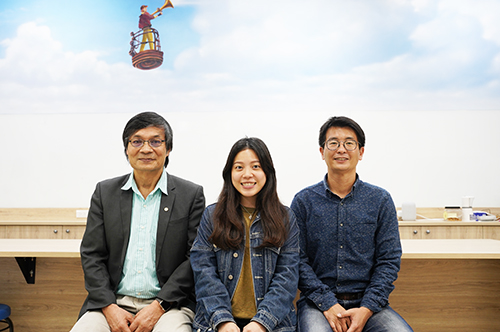 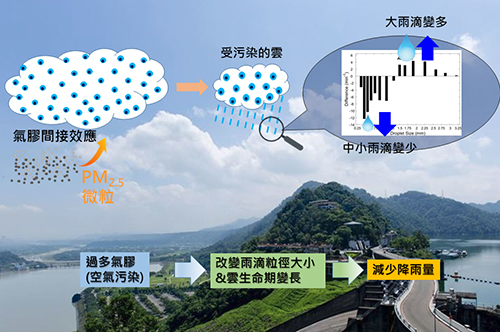