In a first for Taiwan, NCU signs MOU with HelioX Cosmos via teleconference to initiate participation in international Moon mission, while working with the Japanese SpaceBD company to support the growth of Taiwan’s space industry.

Building on experience gained from the successful delivery and launch of the IDEASSat spacecraft by National Central University (NCU) in January, NCU President Jing-Yang Jou and CEO Huai-Chien Chang of HelioX Cosmos Company signed a Memorandum of Understanding via teleconference recently, establishing a partnership for Taiwan’s first mission to deep space and the Moon. NCU will design and deliver a payload for inclusion aboard an international non-government Moon mission that will qualify NCUs satellite avionics for deep space use, while also providing measurements of the deep space radiation environment.

HelioX Cosmos is the exclusive agent for the Japanese SpaceBD Company, which is the designated service provider for the Japan Aerospace Exploration Agency (JAXA). The three parties will work together to build an international academia-industry partnership to support public space science education, as well as to provide R&D, testing, and flight qualification services to Taiwanese firms interested in entering the space market.

According to Professor Jann-Yenq Liu, director of the NCU Center for Astronautical Physics and Engineering (CAPE), there is growing interest and activity internationally this decade towards using the Moon as a testbed for future human missions to Mars. The US National Aeronautics and Space Administration (NASA) has already announced a return to the Moon with crewed missions via the Artemis Program in 2023-2024. In addition to government missions, there are also a growing number of private lunar missions funded and executed by non-government entities that are scheduled to take place this decade, offering the opportunity for contributed payloads. Many Taiwanese firms are also interested by the commercial potential of producing components and products for the Low Earth Orbit communication satellite market. CAPE will work with SpaceBD to provide a design, testing, and flight qualification package to interested firms, allowing for NCU to contribute its experience accumulated over multiple years of space payload and spacecraft development.

Since Taiwan’s first satellite, FORMOSAT-1, was launched 22 years ago, the National Space Organization (NSPO) has worked in collaboration with local academic institutions to design, develop, and launch a total 15 satellites. However, all of these spacecraft operated in Low Earth orbit, which covers altitudes less than 1000 km. No Taiwan space mission has ever taken place in “Deep Space”, which has a much more hostile space environment. According to Professor Loren Chang of the NCU Department of Space Science and Engineering, a deep space mission will offer the opportunity to further improve the durability and robustness of NCU’s spacecraft avionics developed for and qualified by the IDEASSat mission, particularly with respect to the much harsher radiation environment of deep space.

President Jou stressed that NCU is home to the one and only Space Science and Engineering Department in Taiwan, with dedicated space related research centers including CAPE and the Center for Space and Remote Sensing Research (CSRSR). NCU is also one of the few institutions in Taiwan that has developed and flown satellite payloads and small spacecraft. NCU will work to cultivate a new generation of space professionals for Taiwan, while also working with public and private entities to support the development of the space industry in Taiwan.

Through this partnership, the NCU-developed on board computer from IDEASSat will be modified for use at altitudes above 1000 km, in order to qualify it for use in the radiation environment of deep space and the Moon. Sensors will also be included to measure the radiation dose absorbed during the mission, which will be useful for space environment studies, as well as the development of technology for future deep space missions. In a first for Taiwan, this Deep Space Radiation Probe payload will be delivered in 2023 for inclusion aboard a Moon landing mission. 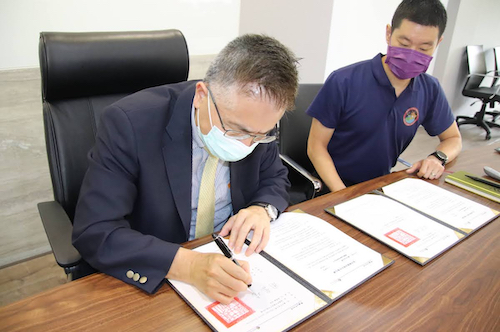 NCU and HelioX Cosmos sign an MOU for deep space exploration via teleconference. 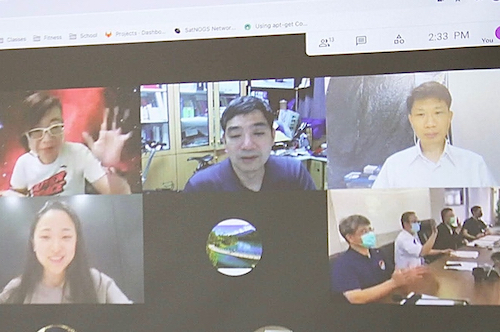 Representatives from SpaceBD attended the MOU signing from Japan via teleconference.
Back to list